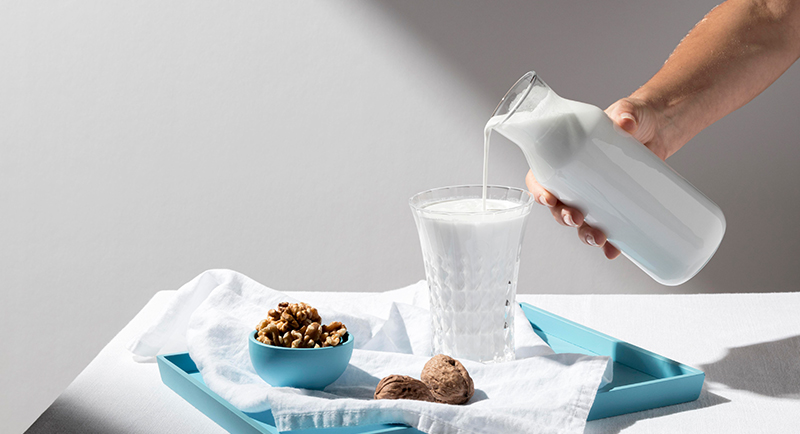 New research is again pointing a finger at men who like to drink milk, which could be raising their odds of prostate cancer. The study published in the June 2022 issue of The American Journal of Clinical Nutrition found that men with a higher intake of dairy foods, but not non-dairy calcium, had a higher risk of prostate cancer than men consuming a lower amount. Named the Adventist Health Study, participants included almost 29,000 Seventh-Day Adventist men in the U.S. and Canada.

Putting it into perspective

Prostate cancer is a complex disease with multiple factors that increase a man’s risk. Genetics, ethnic background, environmental influences, and diet likely play a role in whether a man is diagnosed with this disease.

This latest study was not designed to show if men who drink milk have a greater chance of developing prostate cancer. Rather, it was to discover if this narrative fits into the broader understanding of the influence of the Western dietary patterns in the U.S. and Canada on all cancers, tied together with increasing prostate cancer.

Like all studies, this one did have limitations to take into account. First, study participants were asked to recall foods eaten over a period, which is usually unreliable. Many of us struggle to remember what we ate yesterday, let alone weeks, months, or years ago. Secondly, up to 60% of men are either overweight to obese. We know that consuming too many calories and not enough exercise can lead to excess weight gain, increasing the risk of prostate cancer, especially the aggressive form. Thirdly, a study should be designed to research men who drink milk yet have normal body weight, exercise regularly, and eat a balanced diet including fruits and vegetables, and whether they also have a greater risk of developing prostate cancer.

A 2021 systematic review published in The World Journal of Men’s Health studied the association between the types of milk, classified by fat content (skim, low-fat, whole), and the risk of developing prostate cancer. Findings from this study showed that it is still unclear if prostate cancer risk is related to the dietary fat in milk or non-fat components of the milk.

At this time, the best approach is for men to be advised by their primary care physician on the risks and benefits of drinking milk. The answer may depend on each man’s family history of this disease, their current body mass index, and exercise status. Suppose it is found that certain men should avoid or limit their milk consumption. In that case, the patient should also be counseled on receiving appropriate calcium intake and about vitamin D supplementation.  Milk is a primary source of vitamin D, which is necessary for the body to absorb calcium. Therefore, these factors must be considered when making dietary decisions and how they will affect a man’s overall health.