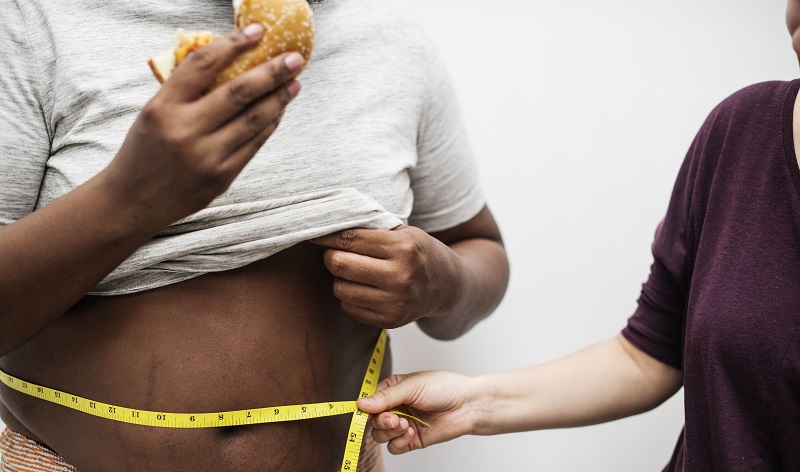 Obesity – A major predictor of low testosterone in men

The problems of low testosterone

The most important hormone found in a man’s body is testosterone. From functioning as a regulator of a healthy sex drive to maintaining the male physique to increasing a man’s competitive nature, testosterone has far-reaching and powerful effects on a man’s body and mind.

That’s why when a man’s testosterone levels plummet, his health will be at risk. While it’s not unusual for testosterone to decline – after the age of 40, it can reduce by 1 to 2 percent a year – it’s the side effects of low testosterone grabbing a man’s attention.

Men who gain weight will also be gaining in the number of fat cells found in their bodies. This increase in fat cells has been found to have a direct link in leading to low testosterone levels in men.  Here how it works:

A 2013 study found that fat cells have a high amount of an enzyme called aromatase. Aromatases are molecules that speed up chemical reactions and one of their jobs is to make the hormone estrogen out of testosterone.  Estrogen is the main sex hormone found in women.  Men actually need some estrogen but in much smaller amounts than women.

Extra weight gain in men means extra fat tissue, which very likely will accumulate in his abdomen or belly known as abdominal fat.  The more abdominal fat tissue a man has the larger amounts of aromatases that are made converting his testosterone into the female hormone estrogen.  Not a good thing for men. As this happens, his testosterone levels will drop precipitously.

Estrogen has another trick it plays on men’s testosterone levels. As more estrogen is produced, it signals a man’s hypothalamus and pituitary gland to reduce testosterone production.

Normally in men, testosterone is made by the testes whenever certain regions of the brain (hypothalamus and pituitary gland) receive signals telling them more testosterone is needed. These glands will then send a chemical message to the testes which respond by increasing the production of testosterone. But in obese men, this signal has been taken over and thwarted by the higher amounts of estrogen he is producing.

Besides the numerous side effects mentioned earlier, low testosterone levels can result in reduced motivation in men.  They feel fatigued with little get up and go to work out.  The less men exercise without making dietary changes, the greater the likelihood of gaining weight. Over time, men will find themselves dealing with significant health issues.

As men lose weight, they also lose fat tissue helping interrupt the vicious cycle of estrogen production that negatively influences testosterone production. The best way for men to lose weight is to adopt a healthy eating plan by meeting with a registered dietitian who can create an individualized meal plan and increase regular exercise focusing on aerobic and resistance training.

As weight is lost, there will be improvements not only in healthier testosterone levels but also in day-to-day functioning. As an example, one study found that men who lost 15% of their body weight experienced a significant improvement in erectile dysfunction.

Any man who is overweight or obese should discuss with their healthcare provider the best weight loss strategy to follow to help elevate their testosterone levels.

The sooner it’s addressed, the sooner a man can get back to living a full life.